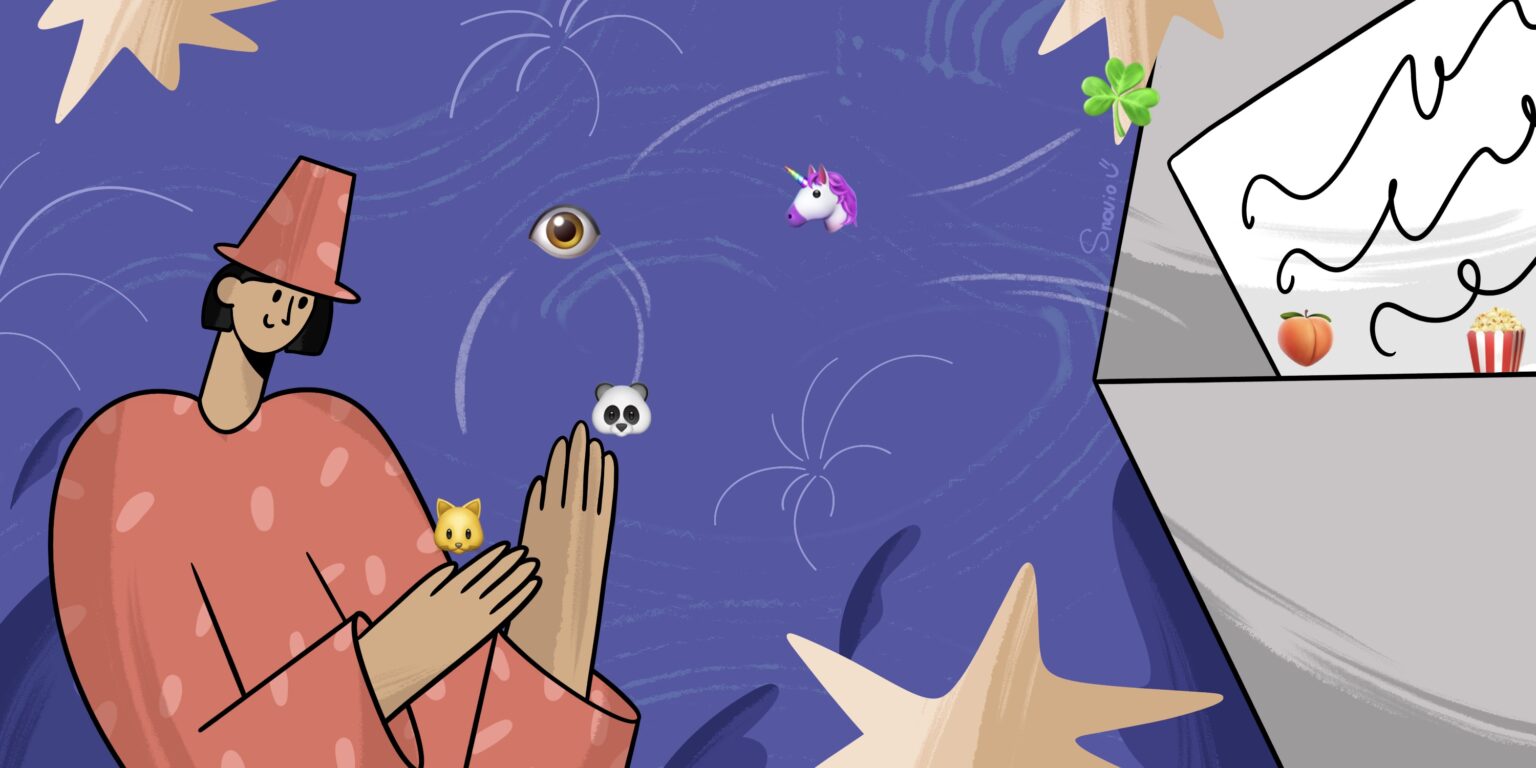 Emojis are the pineapple on pizza for marketers.

Some love them, some hate them, but I’ve never met anyone indifferent to them. The idea for this article came to me when I myself got annoyed by a particularly irritating ? email emoji in my inbox on a busy Monday morning.

“There’s no way emoji for emails can work,” – I thought, but I had to check.

And so I did. There are multiple articles on emojis in emails, but all of them seem to be losing their relevance in 2022, which is why I have collected the most relevant data to create the Ultimate Guide To Emoji For Emails.

Short answer: Sometimes.
Long answer: It depends on many factors, including timing, audience, and emojis used.

Having read and analyzed multiple studies, we can say one thing for certain –  there is no sure-fire formula for using emojis that will give you an improved open rate every time. Here’s why.

One of the more recent studies on emojis in email from 2017 found that some seasonal and themed emojis do improve open rate, while others majorly reduce it. This unpredictability is what makes it so hard to give a definitive answer on emojis’ effectiveness.

Check the stats on this New Year’s promotion above. Pay attention to the two control rates: 18% read rate and 0.11% complaint rate.

The Top 3 emojis performed 3-4% better than average in terms of read rate, yet received 2-4 times the average complaint number. What does this tell us? That emojis don’t provide consistent results. Let’s check another example. 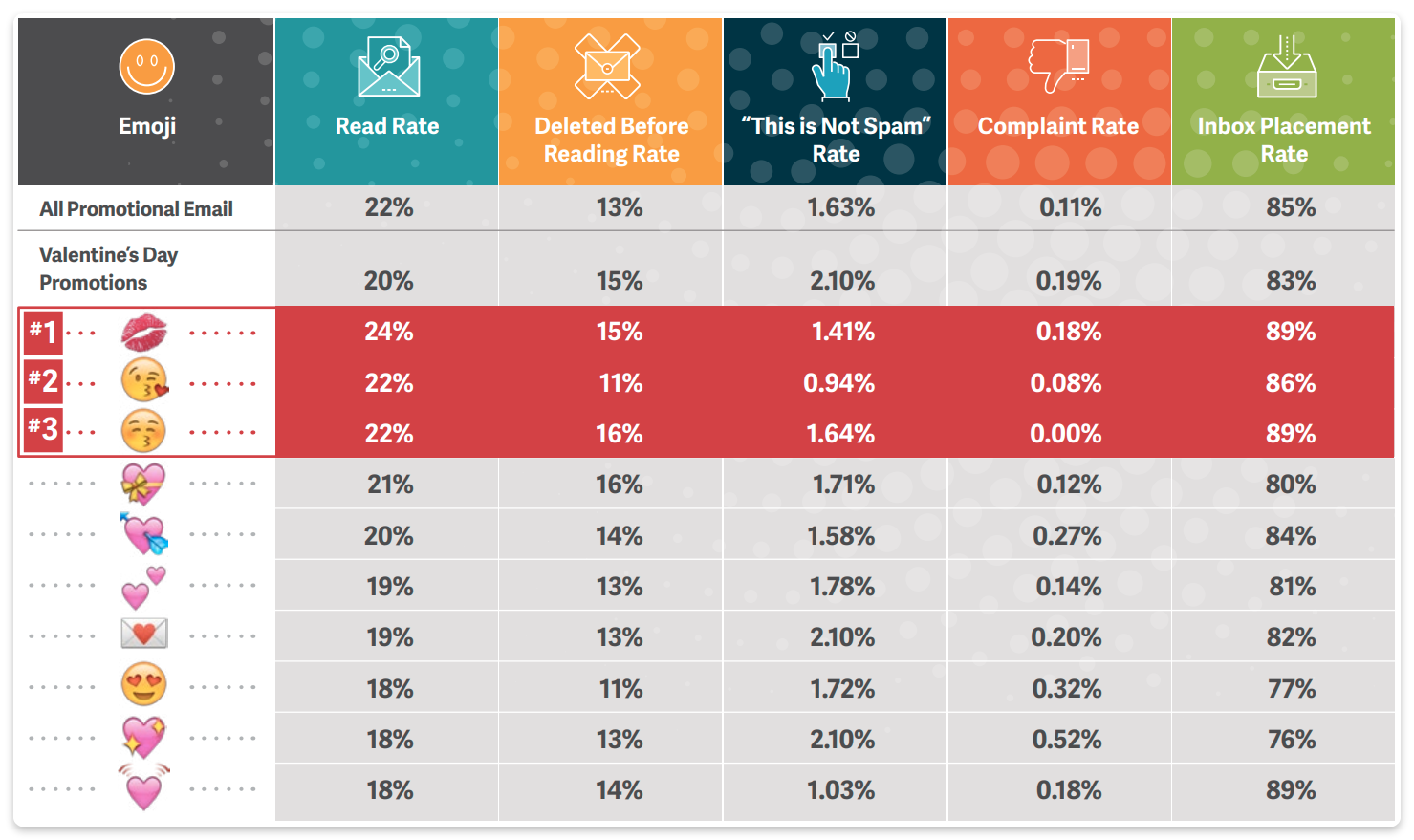 Note that the read rate with and without emojis is on average the same when compared to the All Promo Email average stats.

As we’ve seen in the first graph, different emojis receive different reactions. In another great study from 2018, Braze found that ❤️ is currently the most commonly used emoji. Bear in mind, however, that the less popular emoji you use, the higher the chances to catch your recipient’s attention in the crowded inbox.

Why? Because the insane popularity of the heart emoji means that the audience now is seeing a lot of messages with the same emojis again and again, quickly growing tired of this once exciting marketing trick. This is confirmed by another big study from Phrasee, according to which 100 most common emojis make up 66% of all emojis used in email subject lines.

If you’re not afraid to use emojis in the first place, why not experiment with some of the underrated ones? Why not try to use this little fella 🐌 in your next campaign.

Many are convinced that the success of emojis depends on how well you know your buyer persona, and they are correct. Sometimes, that includes understanding that emojis are not for your audience, too.

Common sense would tell you that younger audiences like Millennials and Gen Z are more likely to engage with emojis, and research confirms that. A survey from 2017 found that 68% of millennials prefer communicating with emojis and gifs, and only 37% of those over 65 agree with them. We can only assume the % is even higher among Gen Z.

B2B emails tend to take on a slightly more serious tone, which makes using emojis in emails not just risky, but inappropriate. This is because B2B emails are closer to professional communication than a massive email campaign, and research on email faux pas shows that emojis are considered unacceptable by 30% of respondents, so save that for close business contacts.

Don’t underplay the importance of your relationship with subscribers. Emojis bring a sense of familiarity with them, which at times is not something you can afford with cold leads. For example, a 2017 study called Effects of Smiling Emoticons on Virtual First Impressions found that “…Smileys do not increase perceptions of warmth and actually decrease perceptions of competence. Perceptions of low competence in turn undermined information sharing.”

A 2016 study by Braze (formerly Appboy) found that men are more likely to have a negative reaction to emojis (13% vs 4%). This great chart from the study shows even more details about how people view brands using emojis in messages (including email). 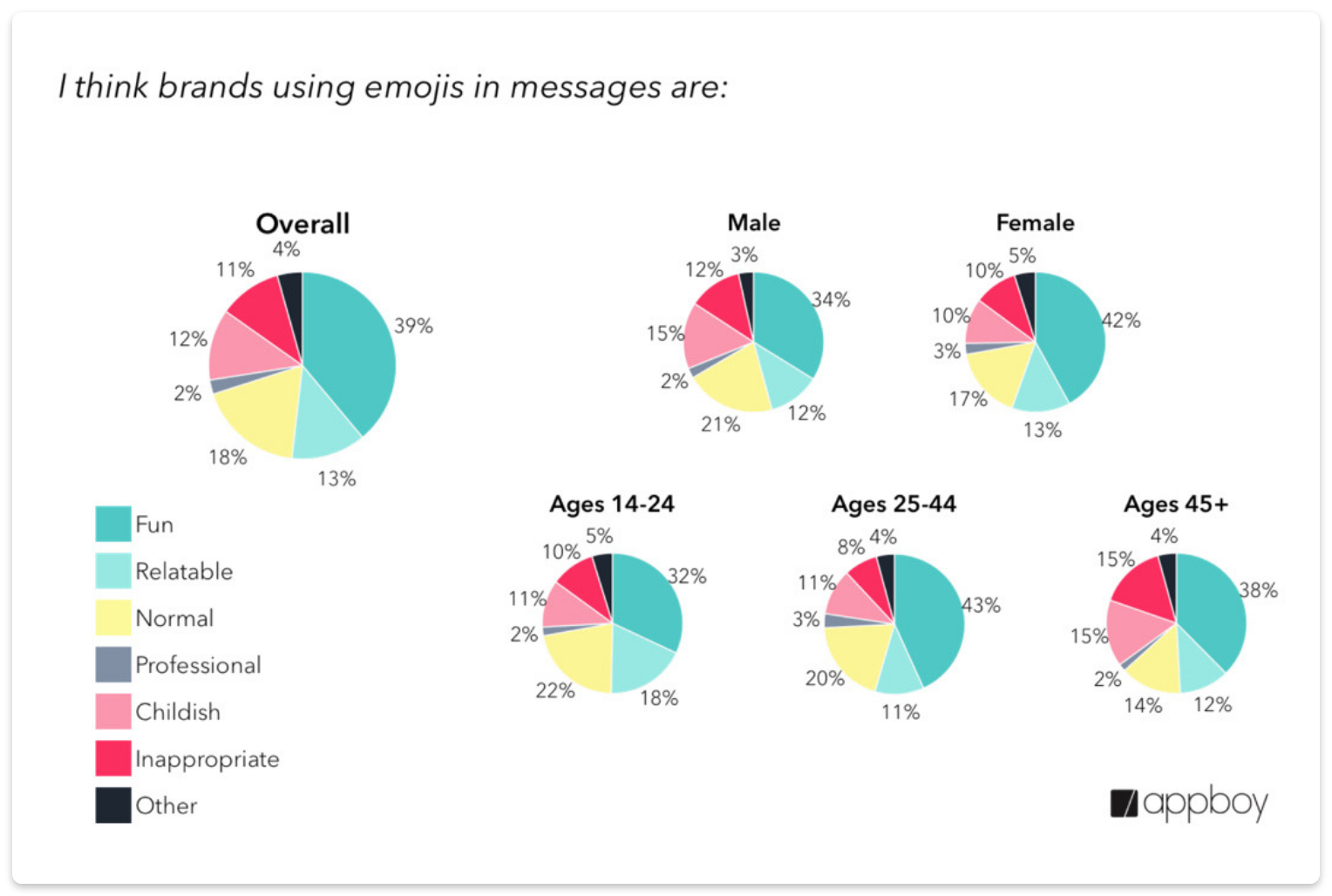 This same study also researched the channels through which people are most open to brands using emojis, with text messages receiving 37%, social media – 28%, and email getting 14%.

In a somewhat unexpected turn, a study by Mailjet found that among Spain, France, the UK and the US, each country had radically different reactions to emojis. In France, all tested emojis in subject lines resulted in lower open rates (-11%), while in the US and the UK the use of emojis showed a growth in open rates (+42% and +62% respectively).

Do emojis improve the CTR?

Yes and no. Emojis increase the CTR in a lot of mediums. However, it hasn’t been proven that email is one of them.

The closest stats we have are from a research that claims that 45% of consumers “like brands that do not take themselves too seriously”. But claiming that the human-ness of emojis will improve your CTR is a reach. Instead, why not try personalization.

Should I use emojis in email subject lines?

If you are looking for reasons to use emojis that aren’t connected to improving your CTR or open rates, there’s plenty.

Are there cons to emoji for emails?

The influence of emojis is too unpredictable to have any tangible reasons against them. The misuse of them, however, can be disastrous.

Things to check before using emojis in email

When it comes to emojis in subject lines, there’s really only two things you should definitely check.

Like with any other email campaigns, you have to A/B test your subject line. You need to do this to make sure your audience is responding the way you need it too. There really isn’t much else to say about this: test the emoji subject lines on a small sample of your email list and compare the results to a control group. You can do this for free by launching a small email drip campaign with Snov.io’s email sequences tool and check the open and click rates in real time.

Incorrect rendering of emojis is what’s stopping a lot of marketers from using them en masse. There are two main problems: emojis may appear different on different platforms and operating systems, conveying the wrong message, or they may not show up at all. These may seem like major problems, but the truth is they are easily solved.

For this you will need a couple of resources. First, check out this table from EmailOnAcid.com. 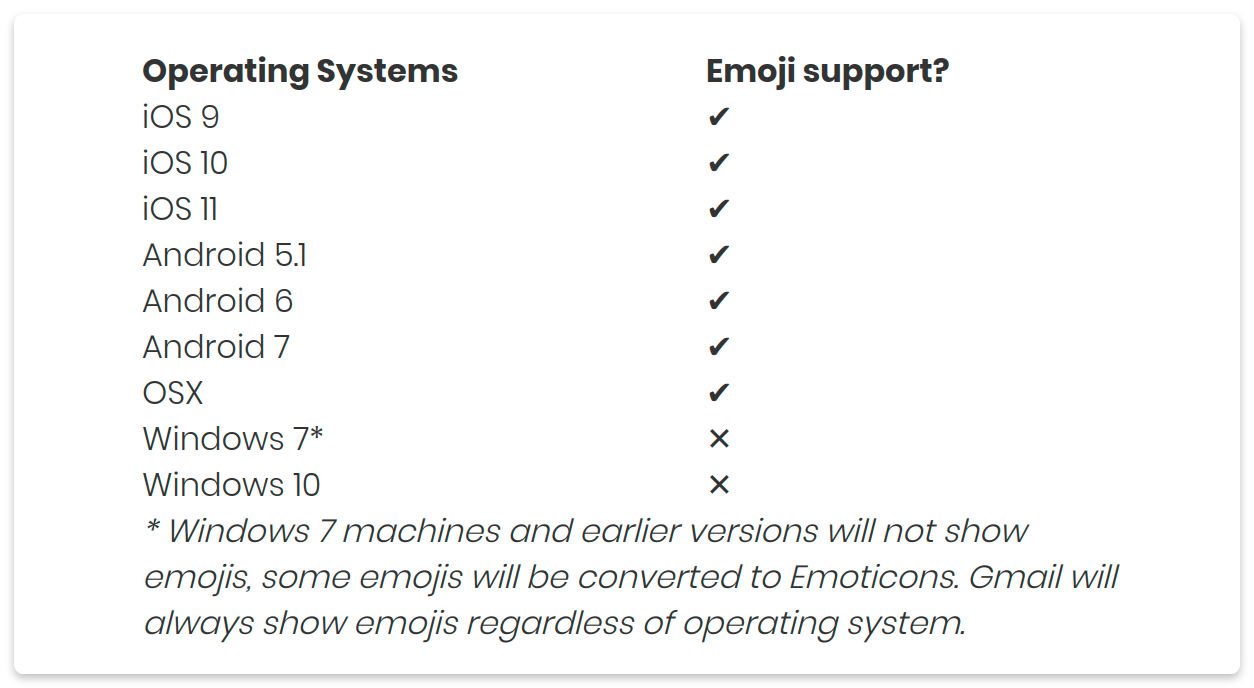 Once you’ve checked this, take a look at this table from Campaign Monitor to check which platforms support emojis in subject lines. 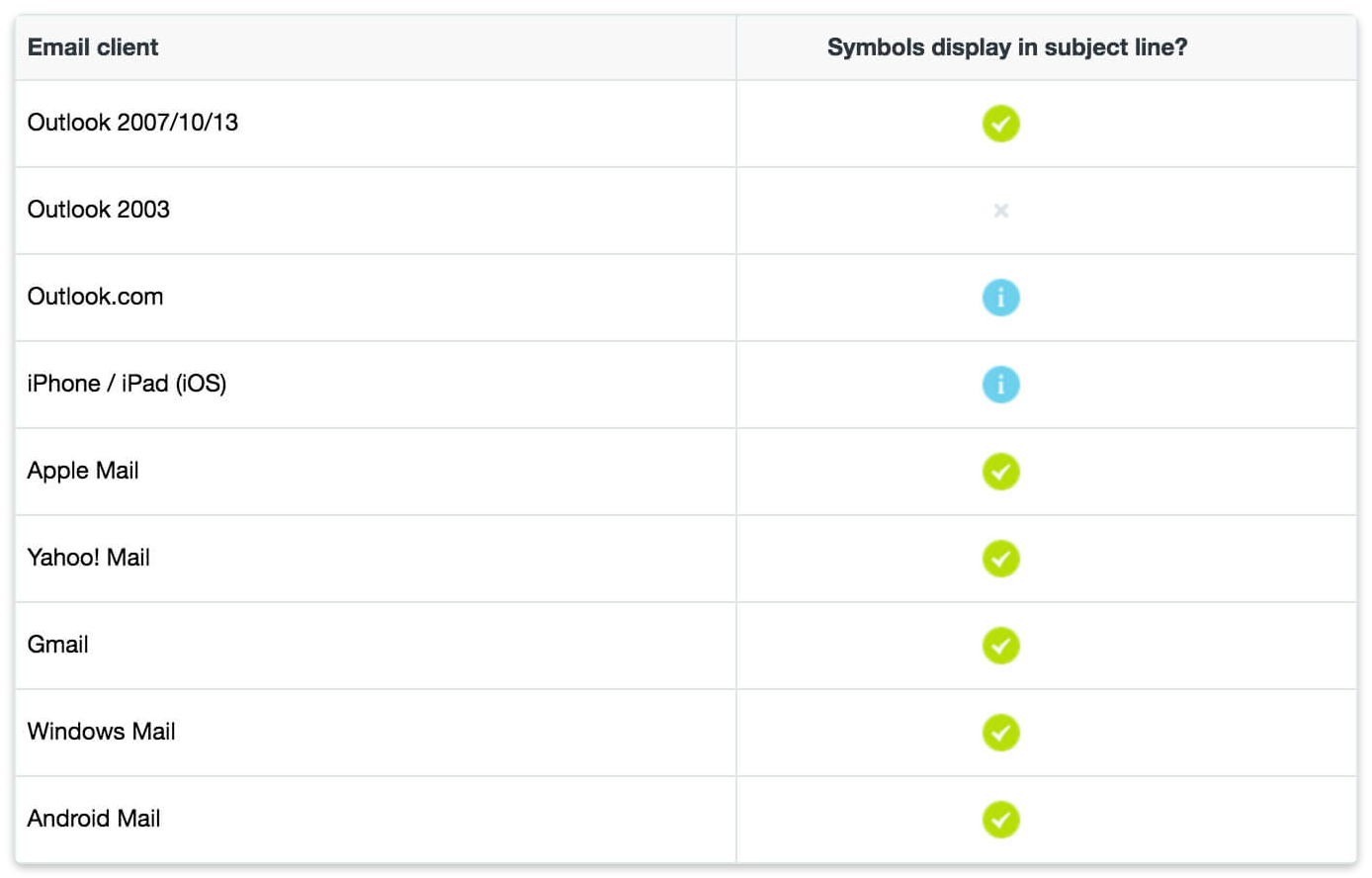 Now that you’re sure your emojis will show up in the email subject line, check if they will be rendered the way you need them to to best convey your message. For this, you can use the following resources:

Please note that even though Gmail will always display emojis, if you try to copy paste the Gmail emoji from email body to email subject line, you will see a ☐ instead. Use one of the resources mentioned above.

If for some reason your emoji doesn’t display right, you have to make sure your subject line doesn’t suffer because of it.

There isn’t much that’s not been covered already, but I’ve gathered a couple of additional tips anyway:

It’s safe to say that emojis are a very neutral element of email subject lines. They do not affect the statistics enough to talk about any revolutionary approaches. The truth is, email emoji are simply fun and sometimes that’s good enough to spice up your campaigns.

The open rates and CTR depend more on the full subject line and other elements of your email, so make sure to pay enough attention to those. If you do choose to use emojis in your email subject lines, don’t forget to target, test, and check emoji rendering.

This article has originally appeared on the Growth Hackers blog under the title
🔥 A Comprehensive Guide To Using Emojis In Email Subject Lines. 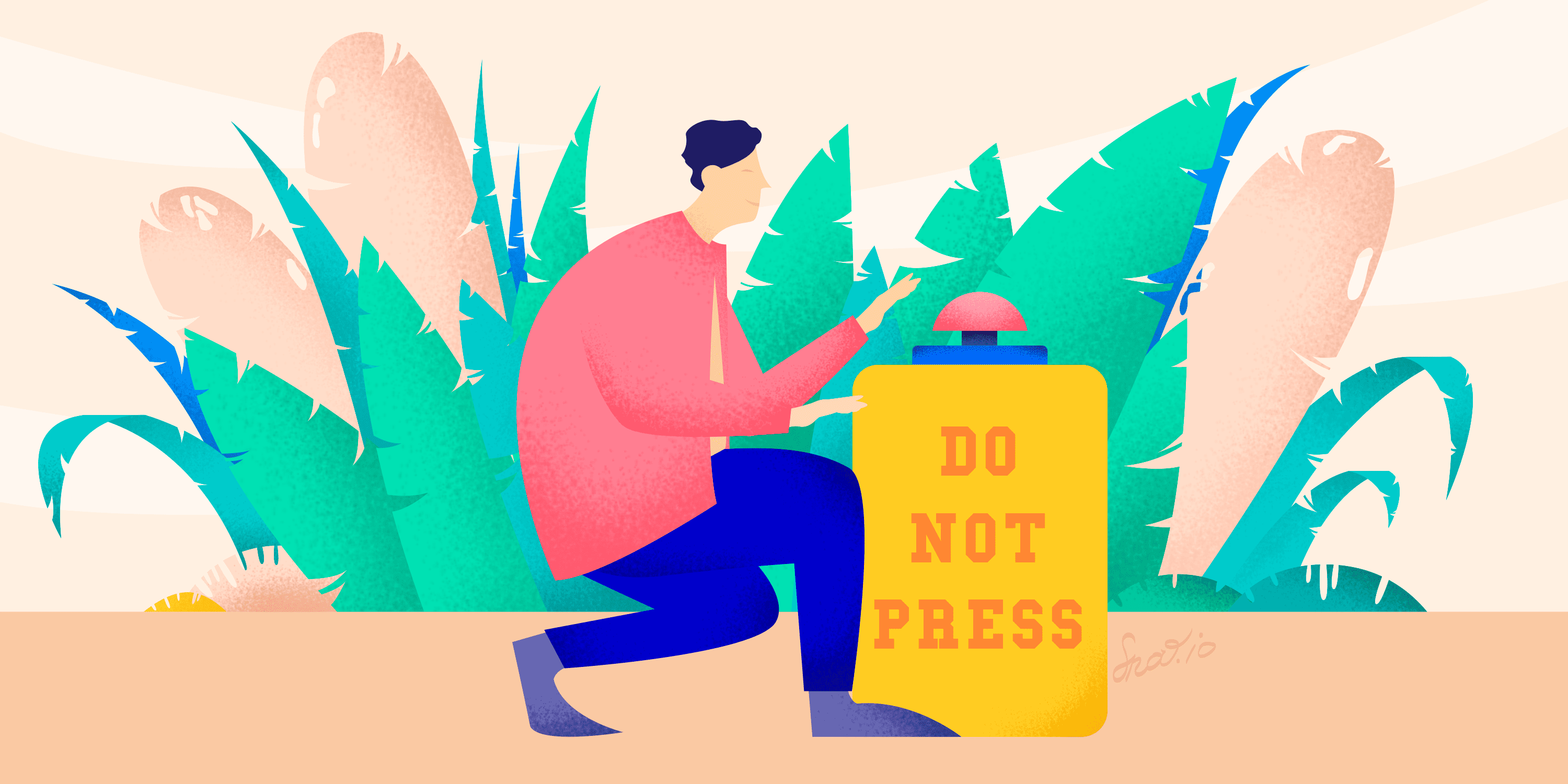 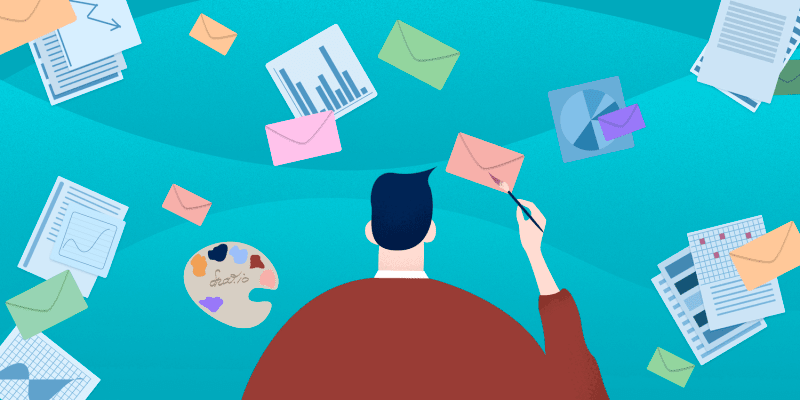 We know and want to share something about colors in email marketing: a complete guide is at your disposal.

What Is Email Marketing: A Definitive Guide For Beginners

Welcome to the world of email marketing! Everything and even more you need to know about it in one post.